Wed. July 27th @ 8pm central
(Thurs. July 28th @ 1am UTC)​
The developers will meet in Discord and test for approximately one hour. However, the servers will remain open for roughly 4 hours. The most up-to-date client can be retrieved via the patcher found on your account page.

What's new?
A good chunk of time this week was spent installing and configuring our new server. This includes setting up a new network and adjusting all the "things" to communicate with one another as expected. The most important thing left to do here is make adjustments to our server deployment pipeline to accommodate their new location; until this is done I will be manually deploying them (frown). Even with that giant distraction we were able to sneak in a good amount of content and QoL updates!

I also wanted to clear up a few misconceptions about how we as developers view our game. While it may have been true in the past that we touted our game as "hardcore" or focused on a very "old school" mentality, we have spent the better part of the last two years attempting to shed that stigma. Since our rebranding, the game has gone through significant changes in hopes of making the game more appealing to a wider audience while maintaining what we feel makes our game special. And yes, our "special sauce" clearly sticks us into the niche category of games - but don't mistake that for us being satisfied with a mediocre product. We want players of all experiences, new and old alike, to enjoy themselves while playing Embers Adrift. Keep your feedback coming!

Bug fixes / improvements:
New stuff:
New Server!
The new server has been installed and mostly configured. There are a few automation tasks that need to be rerouted (most of which revolve around server deployment) but so far things are working well. Hopefully this new server will yield improved NPC responsiveness and allow us to run more zones at once.

Purchasing with bank funds:
This week we are allowing you to purchase from the merchant or repair at the blacksmith using funds from your personal stash. At the bottom of both of these UIs we have added an "Available" panel which shows how much money you have available to spend, and where that money is coming from via the bag and bank icon. This currently applies to all merchants & blacksmiths in the game because all merchants and blacksmiths are near your personal stash. However, in the future you may encounter an isolated merchant or blacksmith that will only accept money from your bag. Money is drawn from your bag first followed by your stash. 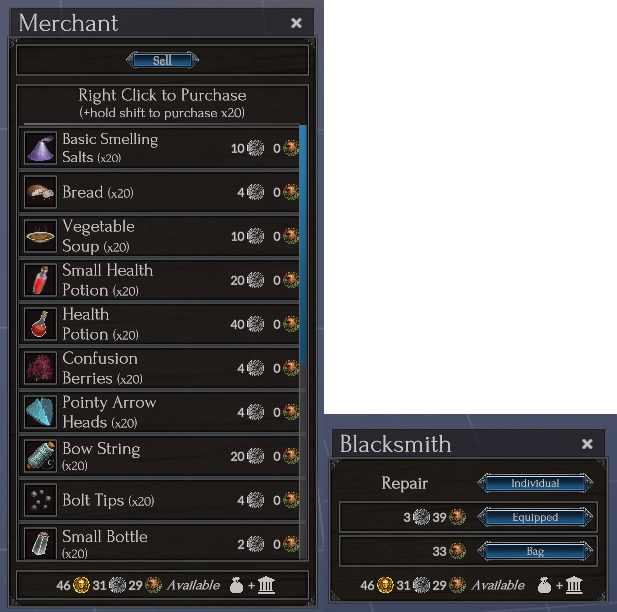 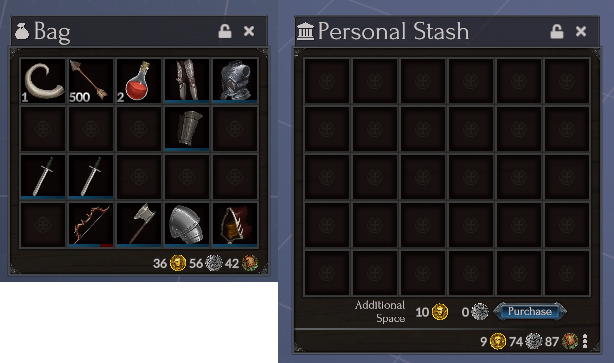 A few things to notice in the above screenshots. First is the new available money panel on the merchant and blacksmith UI. Next is the new container type icon (upper left) on both your bag and personal stash; these correspond to the icons shown in the available panel of the merchant and blacksmith UI. Finally we have the vertical ellipsis to the right of your personal stash's currency panel. This can be left clicked to bring up the context menu for deposit/withdraw (in addition to the normal right clicking on the money itself).

Works in progress:
To see a full list of what is currently in progress head on over to this thread. I will do my best to update this list on a weekly basis and highlight the differences from the previous week with bold font. Below I will highlight some of the upcoming changes in more detail.

North Newhaven Dungeon (timeline: 1-2 weeks)
We promise this is coming soon! We got caught up with some crafting fixes, bag improvements, server installs, etc. which delayed us getting this zone ready for consumption.

New Weapon Visuals (timeline: 1-2 weeks)
We have a slew of new weapon visuals nearly ready to go. Right now there are some minor rotational issues that need to be resolved before we can move forward full boar with these. In addition I am setting up new prefab templates which will allow me to integrate new weapons into the game faster in the future.

Quests (timeline: 1-2 weeks)
The quest system rewrite is nearing an end. We have the current intro quest up and running with the new system and we are moving on to ironing out the smaller implementation details for different objective types. This tech should be wrapped up by the end of the week at which point we will shift our focus completely to implementing new quests.

Raw Component Bag (timeline: 1-2 weeks)
To help ease the pain of being an adventurer who also gathers, we are planning to introduce a new gathering-only bag. Similar to how your pouch can only hold consumables, this bag would only hold raw components. The moment that these components become refined they can no longer live here. This bag would likely not be lost on death - but would love to hear any feedback regarding this.

Expanding the action bar (timeline: 1-2 weeks)
We are likely to expand the action bar from 6 to 8 slots available for abilities. Any thoughts on this?

Experience re-evaluation (timeline: 1-3 weeks)
I think my post last week regarding experience re-evaluation was misinterpreted a bit. As mentioned above, we are in no way are we trying to impose a "hardcore" or an "old school" mentality. What I am trying to do is make the later levels (ones which you have likely not yet experienced) less painful by offloading some of that grind to the middle levels. In other words: my goal is to redistribute of the grind rather than simply increase it. The net result will mean LESS work is required at later levels compared to the current configuration at the cost of slightly more work for the current mid-levels.

Ashen Visuals & Tech (timeline: 2-3 weeks)
Ashen creatures are going to become crucial to collecting the oh so precious ember essence. These require some new tech for spawning along with allowing players to collect ember essence upon their death. After that we can move on to populating the world with this mechanism for testing.

my thoughs on the action bar, is that we are limited on are stamina usage. so it dont matter how many slots we have on are action bar. so i think its a great idea to make it 8 or more. this would really help the healer classes that have been getting the back burner.

as far as i see the grind for gathering just make more resource nods spawn. takes 100 pennies to make a dollar.
and i would make larger animals have the chance to spawn more than 1 carcass to help out making the skinning feel not so taxing on the player

Guys despite having quite a labor, squaring away the new server, you still got a ton done and are kicking butt!

Hello. Nice that we are getting more hotkey slots (action bar, 6 to 8). Nice to see a bag for gathering (Raw Component Bag) only resources will be added as well. Will this be automatically added to our current hotbar/action bar? Or will we have to craft the bags via Outfitter?
Lots of new stuff to test, and see what impact it has on the game, how much more ironing out it will need, without creating any new bugs, if any. Great job on the updates and all the hard work you guys/gals been doing each, and every week.

Oh yeah, we can now have all three harvesting or crafting skills? Sounds like some of us are going to be busy gathering and crafting. Even thou, we have to be at least level 12 in said skill before we can pick up a third. Though I see that as a good thing, but also a bad thing.
Last edited: Jul 27, 2022

Undone said:
Expanding the action bar (timeline: 1-2 weeks)
We are likely to expand the action bar from 6 to 8 slots available for abilities. Any thoughts on this?
Click to expand...

Excited for Quests in a few weeks!
S

Thumbs up for the bag retrieval mechanic changes and the extra gathering/crafting skill!

Killjoy said:
Excited for Quests in a few
Click to expand...

Indeed! I first tested back in October last year and the word then was that quests would be coming in a few weeks....it's all so relative!
R

Undone said:
this bag would only hold raw components. The moment that these components become refined they can no longer live here.
Click to expand...

First off, this is a great improvement. Yay! Second, it could be even Greater if the refined material went there, as well. It's still not an 'item', just a refined component.

Undone said:
We are likely to expand the action bar from 6 to 8 slots available for abilities. Any thoughts on this?
Click to expand...

Undone said:
The net result will mean LESS work is required at later levels compared to the current configuration at the cost of slightly more work for the current mid-levels.
Click to expand...

Why not simple make it Less work at the later levels and stop, right there. No need to redistribute the pain

Expanding the action bar (timeline: 1-2 weeks)
We are likely to expand the action bar from 6 to 8 slots available for abilities. Any thoughts on this?
Click to expand...

Oh la la big thumbs up for this one.

Whanaopeo said:
Indeed! I first tested back in October last year and the word then was that quests would be coming in a few weeks....it's all so relative!
Click to expand...

They were indeed on the list of things to do soon - but we got distracted by so many other things . Anything you want to do in game dev typically ends up taking way longer than you initially anticipated

Stormhaven Studios
Hot fixes for the weekend!
In addition, I have expanded the UI to 8 action bar slots. Rather than expanding the action bar horizontally I opted to shrink the horizontal footprint and instead pull the consumable & reagent pouches above the main action bar. New dedicated keybinds have been added to the options for Consumable 1-4, and Reagent 1-4. These are bound to Shift+1-8 by default.

Undone said:
Trimmed the text for keybind label modifiers. Shift is now S, Ctrl is now C, and Alt is now A. I have also removed the "+" from these as it seemed unecessary.
Click to expand...