Wed. August 24th @ 8pm central
(Thurs. August 25th @ 1am UTC)​
The developers will meet in Discord and test for approximately one hour. However, the servers will remain open for roughly 4 hours. The most up-to-date client can be retrieved via the patcher found on your account page.

What's new?
This week brings a ton of bug fixes, crash fixes, performance improvements, and design changes. Camera damping has been re-enabled thanks to a fix from Unity finally being released. Ashen creatures have made their way into the game and will be expanded in the coming weeks. We have overhauled our quality settings and their default values so new folks can have a better experience right out of the gate.

Bug fixes / improvements:
New stuff:
Humanoid Optimizations
For the past two weeks I have been deep diving into performance related issues with our humanoid tech. I identified a number of places where the code that combines meshes and textures was allocating extra data that would result in large performance hitches. To minimize these allocations I implemented an array pooling technique that basically recycles large lists of things rather than creating new large lists every time. After working through all of the kinks I was able to make significant headway in reducing the allocation overhead while maintaining reasonable humanoid build times.

In addition, these changes are much "safer" in how the data is passed around which should yield far fewer crashes for those who were previously experiencing them while loading in a large number of humanoids. At the end of the day this should result in quicker humanoid initialization and far less framerate hitching when loading in multiple humanoid characters at once. Note that the loading of humanoid assets is still asynchronous - which means that you will still notice delayed load ins of armor/weapons/etc but this is entirely normal.

Ashen Creatures
A new feature has started appearing in the Meadowlands we are calling a "rupture". These can be thought of as a failed Emberdrift that is wildly unstable. Creatures around these have been rumored to occasionally combust into "Ashen" shortly after death. 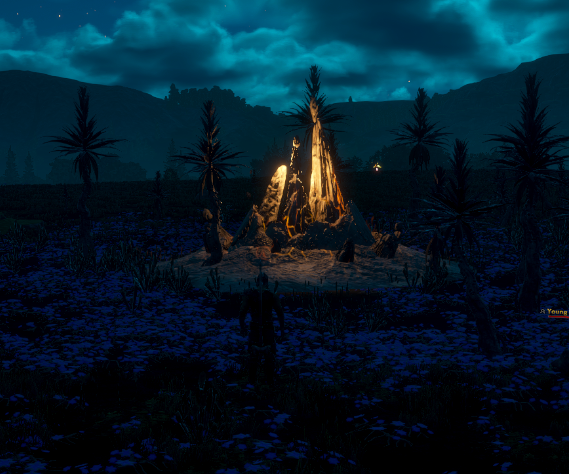 These ashen creatures will soon be the source of ember essence which makes finding these ruptures an important part of the game. Currently they only exist in Meadowlands, but will soon appear elsewhere. Here is a quick preview of some of the ashen creature variants: 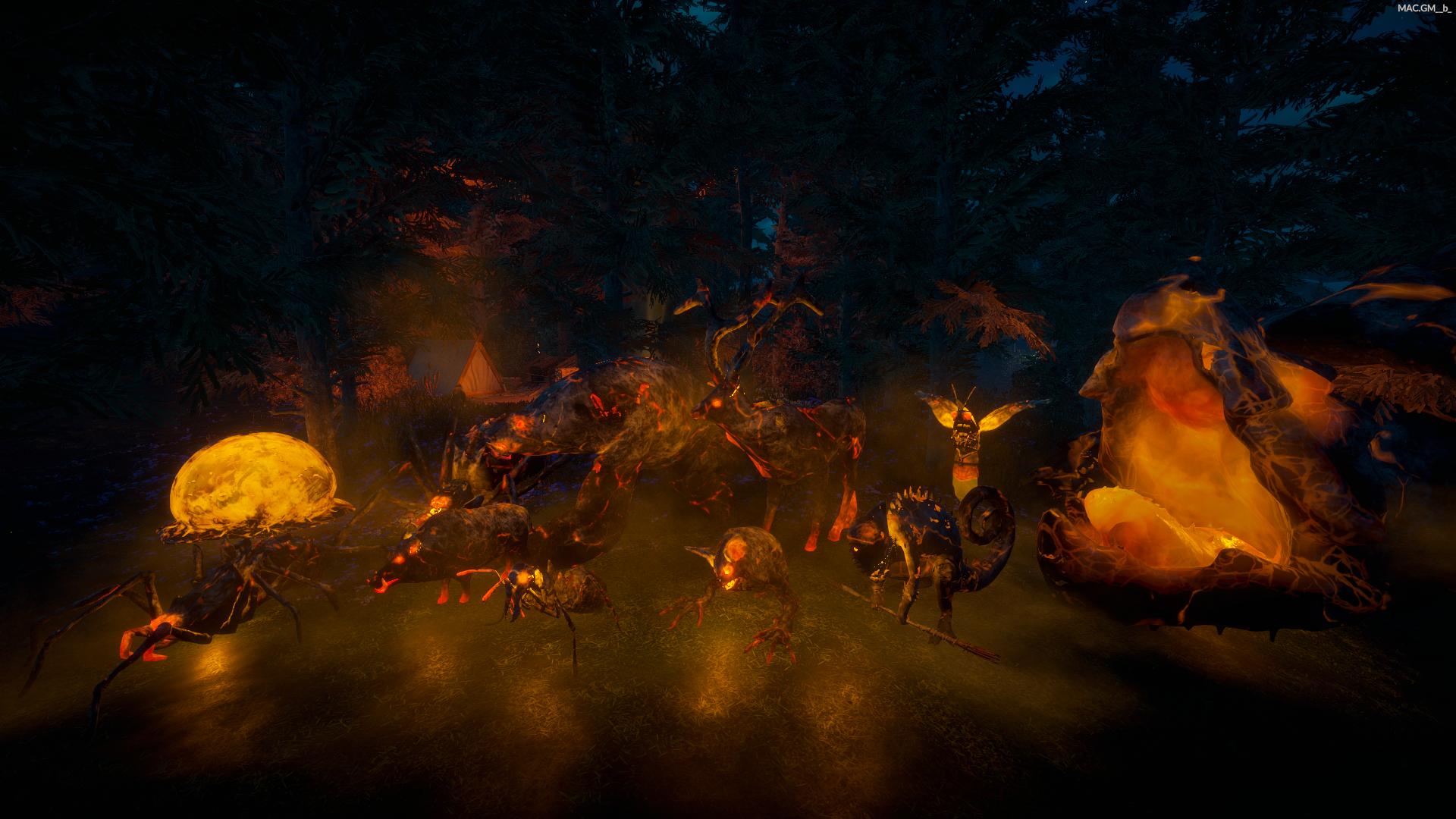 Works in progress:
To see a full list of what is currently in progress head on over to this thread. I will do my best to update this list on a weekly basis and highlight the differences from the previous week with bold font. Below I will highlight some of the upcoming changes in more detail.

Ember Essence Collection (timeline: 1-2 weeks)
Now that ashen spawning tech is in along with ashen creature visuals I can start working on the tech that will allow you to collect ember essence. The design for this is mostly wrapped up but we're not ready to share those details yet.

Mob Leashing Updates (timeline: 1-2 weeks)
As it currently stands every mob has a "soft leash" distance. Outside of this distance if a mob is in the idle or wandering state they will elect to return to their point of origin before resuming their idle/wander. Implementing a "hard leash" or a "reset" state for an NPC is something we are considering, but it has a few extra complications. Some of which are for those who like to kite and issues with different zones/regions having different average leash distances for NPCs. In fact, we already implemented this tech, but it is currently disabled because it causes some funny business in a number of the above described scenarios.

We get to see the ashen, but not reap the rewards!? you tease

jk, glad to have the progress towards the new system!

A new gift bag of treats every week!

Hard lol'd with this one

Btw, not sure if this was intended, but the tunnels between were mostly wolves our first clear, then when we fought back through it a second time, it was entirely spiders, all the way to the wolf den.

I hope it alternates the other way, when cleared out again. Also hope that the higher level wolves in the tunnels, will drop higher level gear.

Also, lol I finally got a back biter dagger to drop, and after 18 levels of wolf grinding to see one, its absolute garbage. I hope that you increased the drop rate. Would have been nice, back when I was lvl 16! Hopefully the new players coming through will get to enjoy the rare drops at an appropriate level.

Good job with all the fixes and the new stuff!
Here’s a few points:

- I can run on High fidelity no problems, but shadows is very taxing. I’d like to have a separate settings for shadow quality only. (Not sure it’s possible, but it’s nice when we are able to tweak every little bit)
- Popup / tutorial alert shouldn’t appear past a certain lvl (i was thinking lvl 10)
- Some NPC abilities does not have description like it used to when mouse over it. I have seen « halt » used by the exile in Redshore, but without the info.

Xavure said:
- I can run on High fidelity no problems, but shadows is very taxing. I’d like to have a separate settings for shadow quality only. (Not sure it’s possible, but it’s nice when we are able to tweak every little bit)
Click to expand...

I'll see what I can do. I'm trying to figure out why these new quality settings are less performant than the ones we had previously even though all of the individual settings are lower. Did the game get better away from light sources with shadows?

These popups should only show up once - so it is unlikely that they would show up for anyone past level 10 if they had existed back when you were leveling 1-10.


Xavure said:
- Some NPC abilities does not have description like it used to when mouse over it. I have seen « halt » used by the exile in Redshore, but without the info.
Click to expand...

This is caused by an exception being thrown that will be fixed for the weekend.

Undone said:
Did the game get better away from light sources with shadows?
Click to expand...

Yes the game ran a bit better during day time and away from light source.

In addition, I am working on the following experimental updates that are nearly there, but not quite so I am punting until next week:

Undone said:
Updated: NPCs now consider Line of Sight to attack. If they cannot see you they will attempt to move TO you.
Click to expand...

wait, they weren't at all before?
D

CypherWulf said:
wait, they weren't at all before?
Click to expand...

some of the archers could hit you through walls in the veins.

CypherWulf said:
wait, they weren't at all before?
Click to expand...

It was something I had intended to do...but apparently I never got around to it? I had enabled LoS checks for a bunch of other functions like calls for help, aoe abilities, etc - but the actual line of sight check before attacks was disabled because (if I recall correctly) it would break some NPCs. I spent some time today fixing that logic up so that it works; things SHOULD be great now.
You must log in or register to reply here.
Share:
Facebook Twitter Reddit Pinterest Tumblr WhatsApp Email Share Link
Menu
Log in
Register
Install the app