Wed. July 20th @ 8pm central
(Thurs. July 21st @ 1am UTC)​
The developers will meet in Discord and test for approximately one hour. However, the servers will remain open for roughly 4 hours. The most up-to-date client can be retrieved via the patcher found on your account page.

What's new?
This week brings bug fixes, more variety in loot tables, and AoE improvements. A good chunk of my time this week was spent configuring new servers, configuring the new router, analyzing player leveling rates, and tweaking experience curves. @sand32 continues to work on quests and tells me that we are close to internal testing - which means player testing is just around the corner. @AdricLives has been populating spawn templates for dungeon rooms which will make bringing new dungeons online far quicker than we were able to do in the past.

Bug fixes / improvements:
Works in progress:
It has come to my attention that we may not be transparent enough in what we are working on. I do not want our community to feel as thought their feedback is not important or under valued. Our team is small which means that we are constantly juggling what we are working on, and sometimes things get pushed to the back of the line. That does not necessarily mean that those things are forgotten, we have just moved on to something else for the time being.

In hopes of being more transparent, I am breaking out the typical WIP section to a new thread of WIP items that will act as a rough roadmap for the game. This list of items is organized by category and is in no specific order of status or priority. I will do my best to update this list on a weekly basis and highlight the differences from the previous week with bold font.

Below I will highlight some of the upcoming changes with more details.

New Servers (timeline: 1 week)
While shopping for a new server we realized that most new/used options didn't quite offer the horsepower we required within our budget. To that end, we built our own custom rack mounted solution. In fact, we built two! One will be heading into the data center, while the other serves as a backup and testing ground. Getting these going took a bit more time than I was expecting due to unexpected issues like cables being too short etc. I also encountered my first bad CPU in my 20+ years of building computers which was quite interesting.

The current plan is to bring the game servers down on Monday at noon so that I can install and configure the new one. Ideally this process doesn't hit any snags but I want to make sure Monday afternoon + Tuesday are clear just in case. This will include mounting the new machine, installing the new router + switch, and making sure everything can communicate with one another. 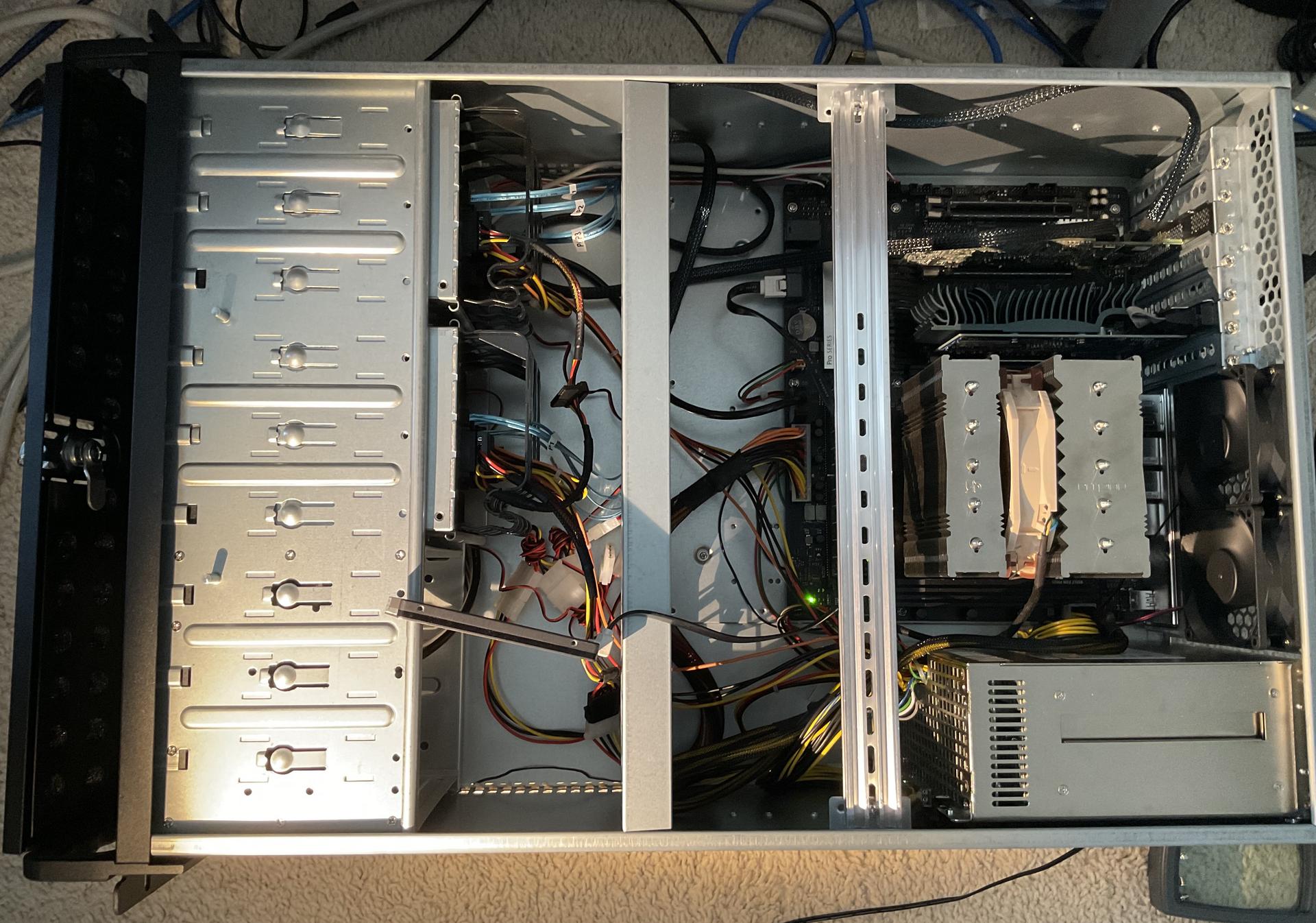 (excuse the cable mess, this was early in the build process!)

Spawn controller improvements (timeline: 1-2 weeks)
There are two primary improvements I am looking to make to our spawning systems in the near future.

The first of which is adding an additional option for selecting what spawns. Currently, each spawn is selected via random draw from a list of items with fixed probabilities. However, this can lead to some "bad RNG" since each draw uses the same set of probabilities. In other words: if a rare spawn has a 5% chance of popping then every time the spawn controller goes to select a spawn it has a 5% chance of selecting that rare. This new method will instead construct a fixed size list containing a number of each item based on their desired probability. As an example, we might create a list of 100 items to draw from and 5 of those items would be the rare spawn. Now every time the controller draws it will remove an item from the list, increasing the probability that the remaining items will be selected on the next draw. This methodology will likely be extended to loot drops shortly afterwards.

The second improvement is adding tech to support Ashen variants. Without spoiling too much of the fun I can say that some additional tech is required in order to bring Ashen creatures online in the way that we want. These creatures will be your primary way of collecting Ember Essence so how we will be bringing them into the world is a bit different.

Experience re-evaluation (timeline: 2-3 weeks)
Over the past week I have been analyzing the rate at which you all have been leveling since the last wipe. The general consensus is that the pace of leveling from 1-10 is just where we want it. After level 10 however, things seem to be going a bit too quickly. By extrapolating your average leveling pace we calculated how much playing time would be required to hit max level. Our findings miss our target by a large margin.

I then started looking into different mathematical representations of a leveling curve that might give us a bit more control over the pacing. The current curve is a relatively simple exponential; modifying the parameters however, impacts the entire curve and would make the end game nearly impossible. Switching over to a logarithmic curve give us a bit more flexibility in where the rise in difficulty happens but makes the later levels all roughly "the same". Finally we come around to the trusty quadratic equation; this gives us a good amount of control, but requires a good amount of fine tuning of parameters. We are still working our way through the finer details of what this curve looks like - but our goal is to make levels 1-10 feel as they do now, and then past that slow things down while making each subsequent level slightly more difficult than the last.