Wed. March 9th @ 8pm central
(Thurs. March 10th @ 2am UTC)​
The developers will meet in Discord and test for approximately one hour. However, the servers will remain open for roughly 4 hours. The most up-to-date client can be retrieved via the patcher found on your account page. This is not a test of the full game; we are continuing to build a solid foundation before moving forward with additional features.

What's new?
This week we bring you a number of recipes fixes, design adjustments, and a UI improvements. We have added bank purchasing, crafted item deconstruction, execution buffers, and a frame rate limiter option. Still no updates on the Unity 2021 update unfortunately - I am still waiting on Unity to respond to my bug report. Stat consolidation & reagent improvements are still on the short list of things to do but these other features kept us busy this week.

Bug fixes / improvements:
New stuff:
Bank Expansion Purchasing
Purchasing of bank space has arrived! You can now purchase single rows of bank space for the amount shown to the left of the "Purchase" button. The first row will cost you 1 silver, the next 10 silver, and so on up to a maximum of 36 slots. The size and costs of these bank slots are still a WIP so feedback here is welcome.

Crafting Deconstruction
Crafted items can now be deconstructed! In the upper right corner of the crafting UI you will find a "Deconstruct" button that functions very similarly to how the repair or sell buttons work. Your cursor changes to a hammer, and then you left click on an item in your inventory. If eligible to be deconstructed the item will be replaced with a junk item, or a random raw component that was used to construct the item you are deconstructing. In addition, you will receive a small bit of experience for each deconstruction based on the level of the item. 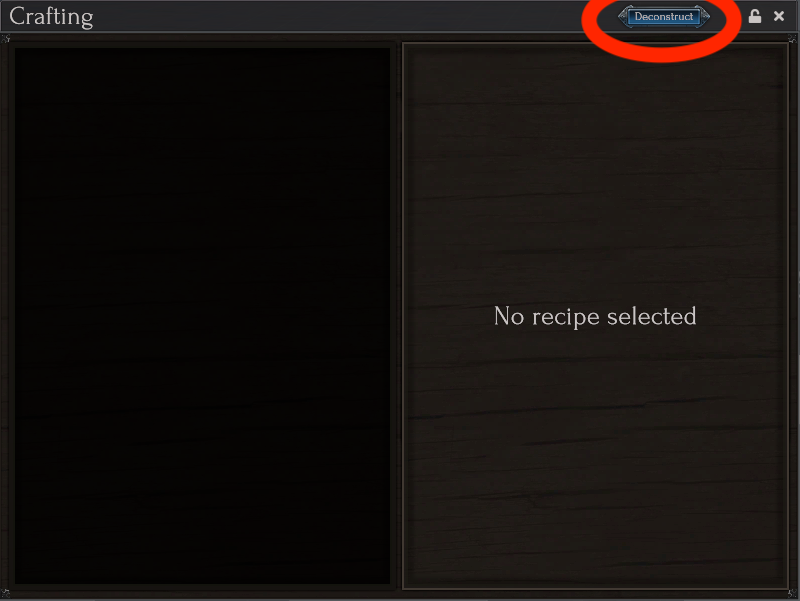 Note that the items returned, the probabilities of getting junk, etc are all a heavy work-in-progress. This is the first iteration of this system which we hope to expand upon. Finally, an item is eligible for deconstruction if the following criteria are met:
This criteria will likely be expanded in the future to only allow deconstruction if you currently know the recipe that was used to create it.

Execution Buffers
This week we have added distance and angle buffers to executions that should provide a bit more lenience when it comes to moving NPCs. Your client is continually checking if you can execute a specific ability - so when an NPC runs out of range or off angle it will immediately cancel the execution. However, many have found that this happens too frequently after they begin execution leading to heaps frustration. This week, after your execution starts, the maximum distance and angle expands as you get further into your execution - meaning that if something goes slightly out of range or off angle after starting your execution you will have a greater chance of completing the execution rather than it being cancelled.

Ability VFX
One of the larger issues at hand with group-play is that no one knows when anyone is doing something important. Most attacks look the same - so unless you are paying close attention to the combat log you have no idea when your tank has triggered one of their threat based abilities etc. This week we have added primitive VFX to the first three abilities for each role (Supporter already had a VFX for their First Aid). This should help the group as a whole more easily identify who is doing what. I must however, reiterate, that these can be considered "programmer" art and are a heavy work in progress. We are also trying to tow that line between being too flashy and too barren - whose difficulty is further compounded by our low fantasy setting and how all abilities work with multiple weapon types.

Also note that some NPC abilities now also have VFX.

Frame Rate Limiter
We have added a "Frame Rate Limiter" dropdown to the video options menu. Without this option the engine attempts to render the game as quickly as possible which can consume all of your GPU. For those of you who are attempting to stream without a dedicated capture card limiting your frame rate "should" help. The options are as follows:

Further Crafting Improvements (timeline: tech complete, some more recipes have been updated, more to be done)
To really round out the crafting sphere we want specific components of a recipe to target specific stats on the output item based on the raw material properties. This tech has been implemented and some recipes now utilize it. However, more work needs to be done to bring other recipes up to speed. Recipes will continue receiving updates as time goes on.

Stat Consolidation (timeline: 1 week??)
We are planning to drop the per-damage-types for HIT & PEN which would clear up a number redundant feeling stats. The rough plan is as follows:
The overall gist is switching from Slashing/Crushing/Piercing to 1H/2H/Ranged and stripping the subcategories for HIT & PEN. More details on this refactor when it gets closer to deployment.

Reagent Improvements (1-3 weeks)
This design allows the player to collect ember essence naturally as they play. Capping the amount in which they can collect at any given time prevents hoarding and forces the player to make a decision on what to spend it on if they want to continue collecting. The considerations mentioned above would allow the players additional ways to spend their essence for the good of others which is something we are always striving to provide.

Unity 2021 Upgrade (timeline: no idea, waiting on Unity to identify a critical bug causing huge cpu usage spikes every few seconds)
In a recent Unity update (2021.2.8f1) some rendering tech we utilize for vegetation stopped working. This update fixed a number of bugs, but introduced a nasty one that prevented us from upgrade for a number of weeks. The bug has been fixed in the latest update (2021.2.12f1) but alas, Unity decided to introduce some significant performance regressions on macOS preventing the update. I need another week or two to continue performance testing before I can push out 2021 builds.

What do we get out of upgrading to Unity 2021? Here are a few ideal gains:

I need more details on the following issues/topics:

OMG!?! Ability Effects! Damn, can't wait to see em! On going too far with them, if it looks like something from Lost Ark, then you probably went too far LOL. Otherwise, SWEET!
Aww, you fixed stuck, there goes my hang gliding practice. at least i can deconstruct it now.
And execution buffers!?! man, what a great patch! Can't wait to try this stuff out!
S

Thank you guys for all the hard work. It's much appreciated, Suntali aka Kindness/Feather/Faithful

Hello. Lots of changes. Nice. Meh, I re read it lol (edit). Lots of new things to test, learn, and try this coming weekend. As always, great job you guys & gals. Everyone at Stormhaven Studios, thank you for your hard work.

Ravenwolf Silvermoon said:
Did they fix the bandage issue with cotton (and the level 20+ plants)?
Click to expand...

Yes, it was actually many provisioner recipes which were affected, should all be fixed now.
S

AdricLives said:
Yes, it was actually many provisioner recipes which were affected, should all be fixed now.
Click to expand...

Yea!! Thanks so much. Now I need to get my SUP to level 8 to be able to use Thick Bandages.

Thanks to the detailed /report from @Nfab35 I was able to find and correct a potential issue where an item count may go to zero without being destroyed.

So what was happening? My hypotheses is that the server's item count was higher than the client's - so when the reduction happens via use/craft/etc the server did not hit zero, but the client did. But how you ask! If you loot something that you already have it becomes a "merge" transaction - and in the response from the server it basically allows the client to calculate the new number based on the new item + your current item. However, if for some reason you received the merge response after the loot window closed then the entire transaction was skipped on the client. This has all be straightened out and the "deletion" of the item in loot is now a separate process than updating the number on the new item. In theory, you should no longer encounter the 0 item count bug!
You must log in or register to reply here.
Share:
Facebook Twitter Reddit Pinterest Tumblr WhatsApp Email Share Link
Menu
Log in
Register
Install the app