Wed. March 2nd @ 8pm central
(Thurs. March 3rd @ 2am UTC)​
The developers will meet in Discord and test for approximately one hour. However, the servers will remain open for roughly 4 hours. The most up-to-date client can be retrieved via the patcher found on your account page. This is not a test of the full game; we are continuing to build a solid foundation before moving forward with additional features.

What's new?
Welcome to Beta! Stormhaven Studios would like to thank everyone for their support throughout this entire process. We honestly couldn't have made it to where we are without your continued feedback which continues to improve the game. Looking back over our work from the last year it's crazy to see how much we've been able to accomplish with a small team in a relatively short amount of time. Here's a quick recap of some of the more impactful changes implemented throughout 2021-now:

And that doesn't even begin to touch on some of the fantastic design work from @AdricLives such as zone population, itemization, recipes, etc. But enough patting ourselves on the back, on to the patch notes! Oh and before I forget - yes characters were wiped so you'll all be starting fresh.

Bug fixes / improvements:
New stuff:
Abilities no longer level individually
Spurred by discussions with the community abilities no longer level up as they did before. Instead, things are broken into a "base" and "spec" level. The base level represents your overall character power level and never decreases. The specialization level however, will drop back to level 6 if you forget and learn another spec.

To more clearly convey this information I have made some adjustments to the skills UI. Before level 6 the spec selection icons will have an overlay with text stating when they unlock. 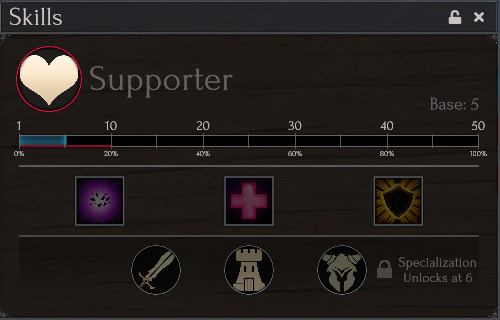 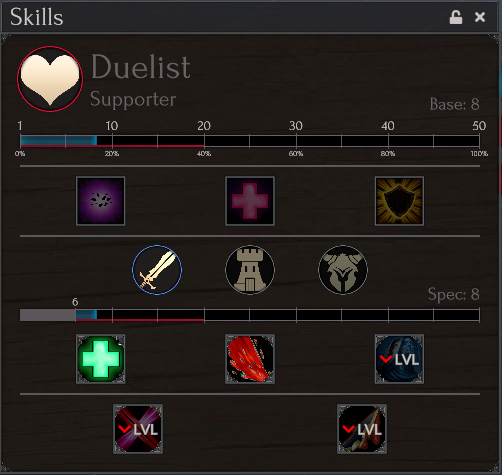 Bank Updates
The number of available slots in your starting bank has been reduced from 36 to 6. Don't panic! I started working on purchasable bank slots but simply ran out of time this week - the ability to expand your bank should come next week. The initial plan is to allow you to purchase subsequent rows (6x slots each) at 1sp, 10sp, 1gp, 10gp, & 100gp which would bring you back up to the previous 36 slots (6x6 grid). However, once this tech is in and working properly we can adjust how much you start with & how much it is expandable. To prevent having to potentially wipe characters I set the bank at the minimum of 6 slots for now. Again - the starting bank size may expand in the future after the purchasing tech is implemented.

Dryfoot
This week we are introducing a new zone: Dryfoot, an arid mountainous region filled with craggy rocks and dangerous foes. There is evidence of a former civilization here as well as remains of some large forgotten beasts. The dust and the hot sun make life in Dryfoot difficult and the winding passes make it easy for adventurers to get lost. This zone can be accessed via the NE path in North Newhaven.

Note however, that this is a "first pass" at content and playable space. We fully expect this to evolve and change when we start getting some performance metrics and player feedback. At the moment the zone feels rather desolate in the "in between" spaces which is something we are actively working on. Some of the larger outdoor areas will likely be spun off into their own "zone" for the sake of performance - this will allow us to pack them more tightly and free up performance for more roaming mobs. Ember rings, discoverables, mob placement, and resource nodes are all a WIP! Another unique type of creature will be introduced here in the near future. 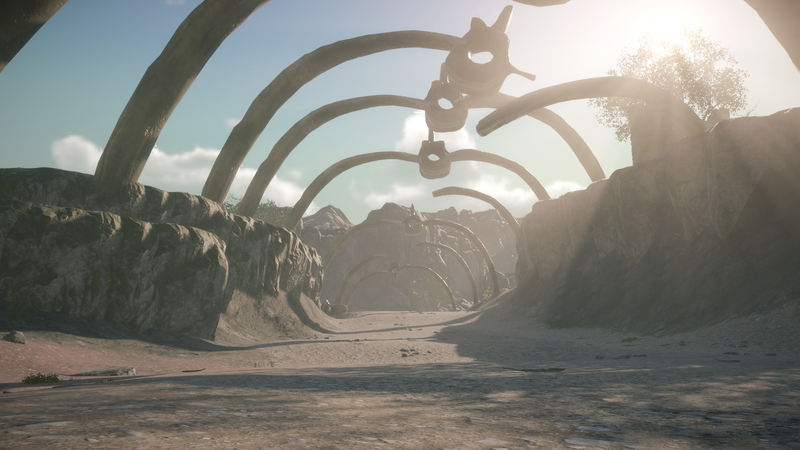 Crafted equipment strength adjustments
With the new crafted tech fully implemented and the shift to focusing on content we are revisiting how good crafted items are. "Basic" crafted gear is now slightly worse than dropped gear with the expectation that this gear is mainly crafted for leveling purposes. This basic crafted gear will still have stat bonuses (final values are still a WIP). "Advanced" crafted gear (in progress) will be equivalent to the previous crafted gear in regards to power - but will require more resources, have higher costs, and/or require rare components. And just to reiterate: these "advanced" crafted pieces are still a work in progress. 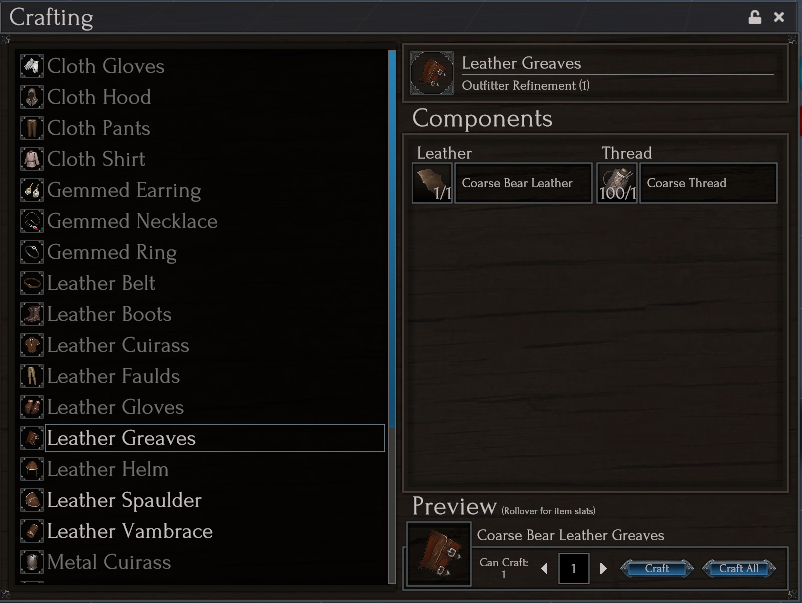 Further Crafting Improvements (timeline: tech complete, some recipes have been updated, more to be done)
To really round out the crafting sphere we want specific components of a recipe to target specific stats on the output item based on the raw material properties. This tech has been implemented and some recipes now utilize it. However, more work needs to be done to bring other recipes up to speed.

Stat Consolidation (timeline: 1-2 weeks)
We are planning to drop the per-damage-types for HIT & PEN which would clear up a number redundant feeling stats. The rough plan is as follows:
The overall gist is switching from Slashing/Crushing/Piercing to 1H/2H/Ranged and stripping the subcategories for HIT & PEN. More details on this refactor when it gets closer to deployment.

Reagent Improvements (1-4 weeks)
This design allows the player to collect ember essence naturally as they play. Capping the amount in which they can collect at any given time prevents hoarding and forces the player to make a decision on what to spend it on if they want to continue collecting. The considerations mentioned above would allow the players additional ways to spend their essence for the good of others which is something we are always striving to provide.

Unity 2021 Upgrade (timeline: another week? ugh - did not investigate this week, was distracted with Dryfoot)
In a recent Unity update (2021.2.8f1) some rendering tech we utilize for vegetation stopped working. This update fixed a number of bugs, but introduced a nasty one that prevented us from upgrade for a number of weeks. The bug has been fixed in the latest update (2021.2.12f1) but alas, Unity decided to introduce some significant performance regressions on macOS preventing the update. I need another week or two to continue performance testing before I can push out 2021 builds.

What do we get out of upgrading to Unity 2021? Here are a few ideal gains:

I need more details on the following issues/topics:

Good Job Devs. Look forward to getting in and playtesting.

Another great patch. Thank you and big congratulations to Stormhaven on the beta milestone!
Cheers!!
Skeezix

Stormhaven Studios
Hotfix for the weekend:

This screen is so beautiful Love the lighting

This screen is so beautiful Love the lighting
Click to expand...