Wed. June 22nd @ 8pm central
(Thurs. June 23rd @ 1am UTC)​
The developers will meet in Discord and test for approximately one hour. However, the servers will remain open for roughly 4 hours. The most up-to-date client can be retrieved via the patcher found on your account page.

What's new?
Happy belated summer solstice everyone! This week we bring you a number of seemingly small but fundamentally important changes that we have been iterating on for the past 3 weeks or so. Dropped gear has been more evenly distributed throughout the world giving you a reason to fight non-humanoids. Crafting has undergone many design changes with the goal of making progression feel more meaningful. We are also working on Gathering/Crafting specializations which we hope to roll out in the coming weeks.

Characters have been wiped and you will all be starting over from scratch. Leveling potions have been removed so that we can accurately assess leveling speeds and progression "feels". I know many of you have gone through the leveling process numerous times but please leave feedback for how this particular iteration feels. I cannot stress enough how crucial the low level experience is and we have to get it right if we want the product to succeed. I know we don't yet have quests in (coming soon!), but please pay attention and leave feedback on how you feel about the leveling pace, character strength progression, and equipment progression.

Bug fixes / improvements:
New stuff:
Recipe diversity
Previously harvesting & crafting professions had relatively few recipes that were each extremely flexible (i.e. the sword recipe could make all kinds of swords with different materials). One of the downsides of this system is that players often felt a lack of progression as they leveled up. These recipes didn't indicate when something new unlocked so it never really provided you with something to work towards. This extreme flexibility also prevented us from being able to show you what was possible unless you had that specific set of items in your inventory.

We have taken those super flexible recipes and broken them down by material tier. That sword recipe has now becomes a recipe for each material tier (Copper, Sword, Tin Sword, etc) to provide a greater sense of progression. However, you may remember that when we refactored the raw materials that more potent versions of materials will come back into play at higher levels (i.e. there is a new version of copper that shows up around level 40) - we were able to keep a bit of that recipe flexibility as these more potent materials will still be usable in their associated recipes (i.e. more potent copper can be used in the Copper Sword recipe). We are also hoping that this change makes things a bit easier to show you a preview of the output item without having to have all of the components in your inventory. Note that this (showing you a preview of the item without having the components in your inventory) is something we working towards but cannot guarantee it will happen. In other words: no promises.

Dropped vs. Crafted equipment
One of the big issues we have been wrestling with over the past few weeks is how to make crafted gear not be terrible while also not stepping on the toes of adventurers. This ultimately led to the introduction of Ember Flux which we feel was a big improvement overall. To make sure that dropped gear remained viable we ended up nerfing non-imbued crafting gear which left many feeling a bit unsatisfied.

To remedy this we are essentially separating the two so that they no longer step on each other's toes. Some equipment slots will only be fillable with crafted gear, while others can only be filled with dropped gear. This is especially true in the early game. However, it very well may change as players level up and crafting specializations are introduced (which may unlock additional recipes for crafters that allow you to make gear that was previously only obtainable via adventuring). There may also be exceptions to this rule when it comes to rare drops, etc. Think of this more as a "guideline".

Chameleon color improvements
We have new shader tech implemented that improves the visual variety of our chameleons; we can now adjust the base and pattern colors separately. Each chameleon "type" will have a fixed base color while all of their pattern colors will be randomized for visual variety. In addition, the base color will decrease in saturation as they lose health. Here's a sample of the four base colors: 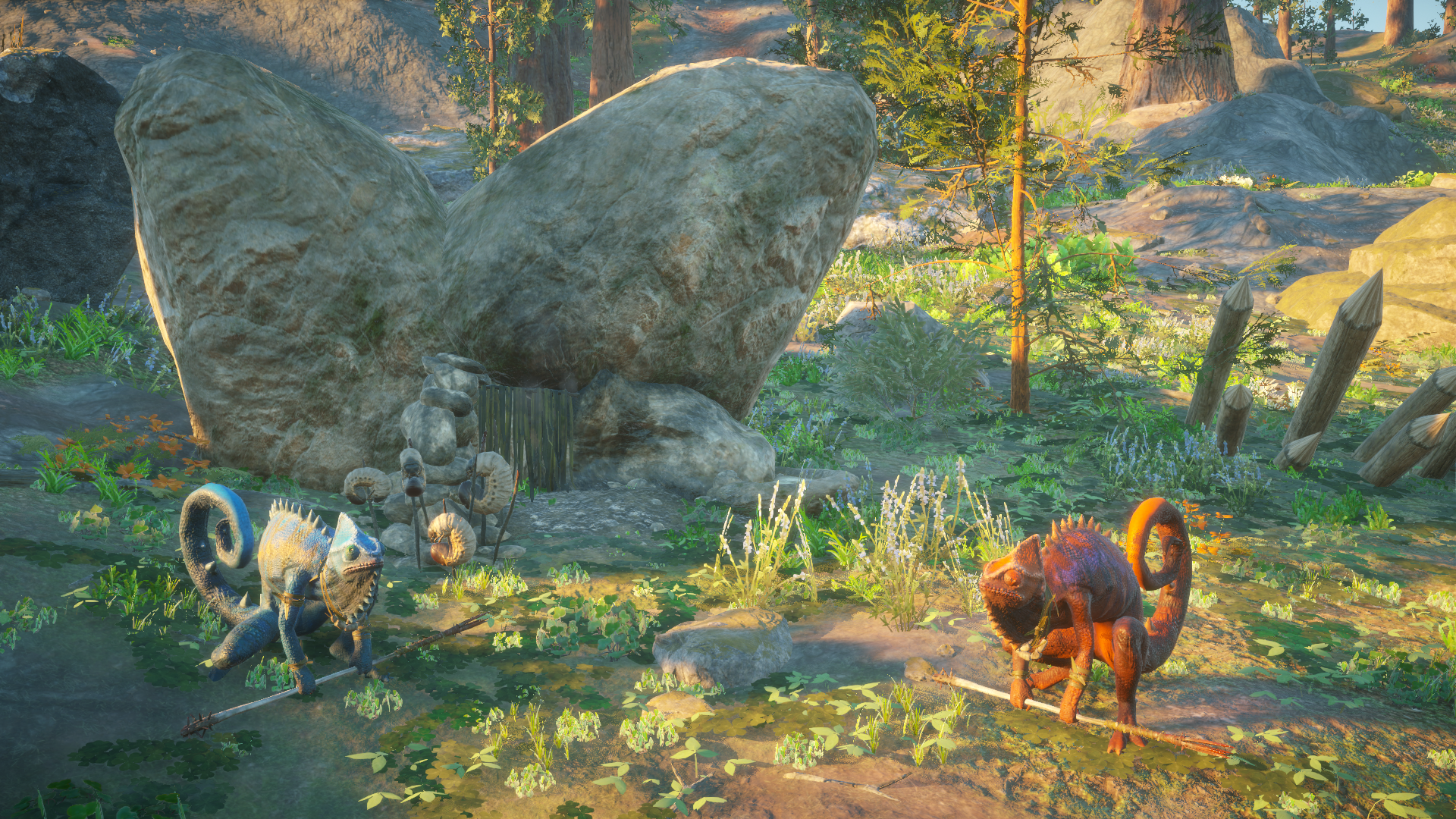 Augment & Repair Kit tech
This week tech was developed which opens the door for repair kits and item augments. Right clicking on one of these items will change your cursor to a different icon (similarly to selling, or repairing), at which point you can click on one of your items to perform the action. Repair kits will allow you to repair a fixed amount of damage on an item. The cost to create a repair kit will be relatively expensive as we want it to be cheaper overall to visit an anvil. Augments will apply a temporary bonus to a piece of equipped gear at the cost of binding it to you (which means you will no longer be able to trade it). Weapon augments currently come in the form of +Dmg/Pen/Hit/Flanking and expire after a specified number of successful hits. We are still working through the design of inner & outer armor augments.

The tech for repair kits and augments is in but are not yet available in game (soon). The recipes for these items will likely become available when crafting specs come online (soon).

Chitin Armor Visuals
As mentioned above a new armor type with visuals has been added. Here is a preview of those visuals: 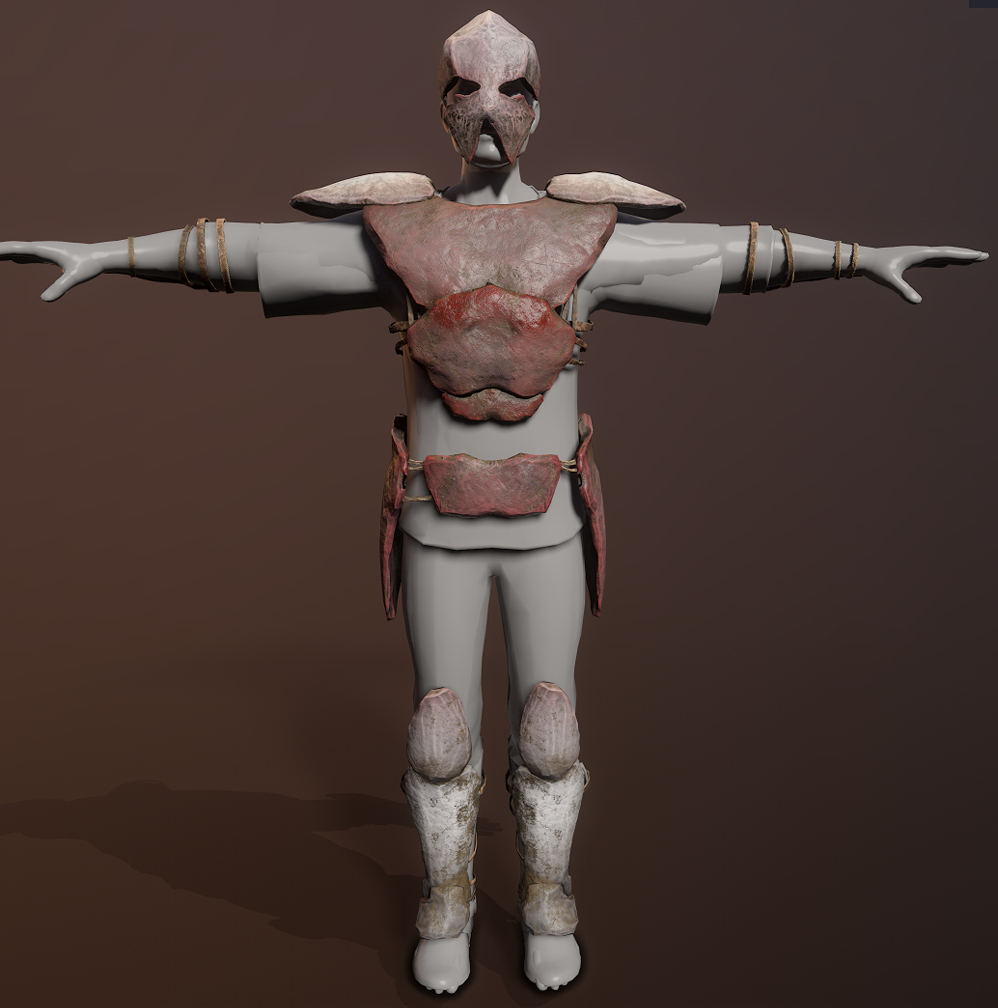 Unity 2021 upgrade
This week should be the final week in which we are "testing" 2021. I spent a good deal of time this last week working out a bunch of our server issues with 2021 and I think everything is going smoothly at this point. I found a few critical bugs that I reported to Unity and was able to work around thankfully. Once the whole team makes the move to 2021 we can start addressing some of the smaller issues like terrain texture tiling, fog volume visual issues, etc.

Unity 2021 Linux update
While isolating server issues for my bug reports to Unity I was able to make some progress on the native Linux client. We're still a long ways off due to sporadic crashing but I was able to get the client to load without insta-crashing which is some semblance of progress. I will keep hacking away at it when time permits and keep you all updated. Thank you all for your patience!

Excellent update. Hopefully the new crafting will have an even gain on profession / gathering exp this go round.

Undone said:
New ability "Strike" given to all characters at level 1 in addition to their normal role ability. This should help the early game feel a bit more engaging without sacrificing later balance as this skill does not scale.
Click to expand...

Could have made it "Kick" like I suggested months ago.....but hey, at least there is now that generic ability, so that's good.

Kittik said:
Could have made it "Kick" like I suggested months ago.....but hey, at least there is now that generic ability, so that's good.
Click to expand...

I think we mentioned at the time - but "kick" doesn't work with ranged weapons :O

Nfab35 said:
Excellent update. Hopefully the new crafting will have an even gain on profession / gathering exp this go round.
Click to expand...

I agree, looks like a nice update. I am looking forward to checking out the new crafting progression.
V

Good Stuff. The added skill at level one helps immensely as it helps cut down the time to kill lower level mobs.

In response to your character rotating. This doesn't necessarily pertain to the issue you're talking about with interactions and such. But I have noticed for quite sometime and it doesn't happen often lol but when it does it's really bothersome. Best way I can describe is when your character moves close to a wall or anything that would restrict your current field of view, your view you're currently at spins around and messes up your current view. Not sure why this happens. It seems to me if you're panned out away from your character and getting close to something restricts your view, it's almost like the game cannot decide what it wants you to see or what direction you should be facing. If I knew how to record a clip of it while I'm playing I'd send it to clarify things more. But sadly I'm not very computer savy.
Last edited: Jun 29, 2022
You must log in or register to reply here.
Share:
Facebook Twitter Reddit Pinterest Tumblr WhatsApp Email Share Link
Menu
Log in
Register
Install the app